Get Involved
Join the fun and help for the future

How to Get Involved

TThere are lots of ways you can get involved in park life. Check these out:

Have a look at our current projects and see if you'd like to join in.

In October 2017, following a successful public consultation, the largest natural pond in the park was fenced off and a field gate added. Prior to this, the pond had been unable to provide a home for freshwater species due to our four-legged friends swimming in it. Stage One of the project was achieved using funds kindly donated by Knaresborough Lions’ Centennial Community Fund, and Harrogate Borough Council Commuted Sums.

In the park’s top field, (highlighted on the map) we are working to encourage the spread of native wildflowers (such as Common Orchids, Yellow Rattle and Lady’s Smock), by ensuring hay is cut and taken away from the field to rot.

The reason why it is essential to cut the hay and remove it from the field is that, when it decomposes, the hay releases nutrients into the soil and the wildflowers do not thrive in such nutrient-rich conditions. Having native wildflowers in the park not only increases everyone’s enjoyment of such a beautiful green space but most importantly, these flowers are an essential source of nectar and pollen to feed insects such as bees, moths and butterflies.

In response to recent and past complaints about a minority of dogs in the park, Harrogate Borough Council will be fencing a small area of the park as a short-term trial and asking dog walkers to not
take dogs into the area.

For further detail, see below

Harrogate Borough Council (HBC) and the Friends of JSP have had reports of a problem with a minority of dogs scaring children & other park users.

Recently, a park user contacted us to share details of a recent incident where their 3-year-old was knocked over by a poorly controlled dog and the toddler is now nervous about going back to the park.

It is also worth noting that the same park user walks a dog in the park, so is not against dogs!

There have been other similar incidents recently and in the past.

What is the trial?

HBC will be fencing a small area of the park between 16th August and mid to late September and asking dog walkers to not take dogs in.

This would create a dog-free space for children to play, people to have picnics or play games/ball games etc.

The area to be fenced is in the cut grass to the left of the park entrance as you come in.

The area will be small, making up less than 3% of the park’s area so should not make an appreciable difference to the space available for dog walking.

HBC will use temporary plastic fencing that they already have in store (and has been used elsewhere such as the Stray).

We all understand that the orange plastic mesh fencing is not in keeping with the ambience of the park, but it will only be for a short trial.  It will also not have a proper gate for the trial period.

We are all keen to receive your feedback at www.harrogate.gov.uk/haveyoursay during the trial period.

What happens after the trial?

The park was created for the benefit of the people of Knaresborough and we want to make sure all people can enjoy this green space.

A trial allows us to understand whether more people use the park, how well the approach works and whether it creates any other issues.

HBC would then consider whether it is appropriate to progress a longer-term solution.

Any longer-term solution would have to be in keeping with the park environment. 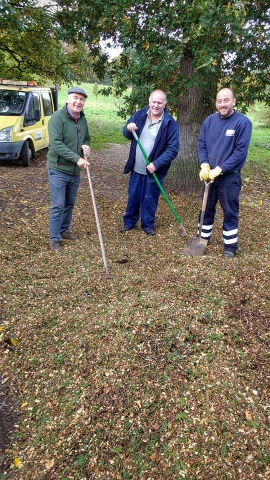