PPark History ~ from our Young Friends

A Brief History of the Jacob Smiths

I am sure that many of the people living in Knaresborough (especially Scriven) are familiar with the name Jacob Smith. The reason for this is that the wonderful park near your home takes that name. Why? Because the original owners of the land that is now our lovely park, Winifred and Dorothy, witnessed a loss that changed their lives forever. Their father, who was named Jacob Smith, bequeathed the family home and dairy farm (Park Corner) in Scriven to the girls after he passed away in 1941.  The sisters had always been very active in the family business and had a high respect of agriculture, and took over the running of the farm and herd of cattle. In 1965 Winifred and Dorothy purchased 30 acres of farm land, Scriven Park, (close to their dairy farm) which they had previously rented, to provide grazing land for their Cattle.

After Dorothy died in 1984, Winifred manned the farm for as long as she could afterwards. When she was able to cope alone no longer, she moved to a nursing home and lived peacefully until her death in 2003.   Following Winifred’s death at aged 94, the grazing land was generously given to Harrogate Borough Council to manage for the people of Knaresborough to enjoy. This is Jacob Smith Park as we now know and love it.

Although Winifred is gone, her memory still lives on to this day. With her huge legacy worth £10,000,000 to Yorkshire Cancer Research  and her highly respected role as a member (and later organiser) of the women's land army in the second world war (1939-1945).

I am sure we can agree that Winifred Jacob Smith was a truly remarkable woman.

Check out our PondLife! 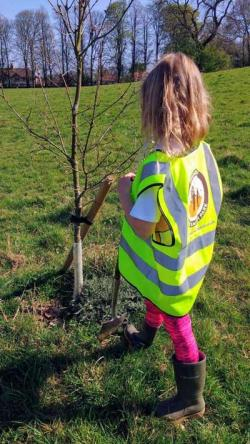