Below is a species list from our first-ever wildlife pond dipping session in March 2019. The species record will be kept updated as we explore more of this exciting habitat.

The Diving Bell spider (aka Water Spider) is the only spider capable of living permanently under water and requires a well vegetated pond.

This is a very successful spider and spins a web under the water across the vegetation. It swims with an ungainly movement to the surface and collects air on the velvet hairs of the abdomen, trapping it there with the hind legs. Then it clambers down, under the web and using the legs scrapes the air bubble off the body. In this way the web takes the shape of a bell under the pressure of the air bubbles which soon fill it.

Within the bell the spider lives, mating and taking the food in there to eat. It feeds on a variety of aquatic animals. Many strands of web are produced around it so that it can pull itself along with the air bubble on its back. The bell acts a little like a gill: some of the carbon dioxide diffuses out into the water and oxygen diffuses into the bell of air. However, the spider does have to replenish the bubble occasionally. During the autumn the web is thickened and they hibernate here. The male may share the bell with a female and the eggs are laid here where they hatch. Once they leave the bell they do not make their own bell immediately but are somewhat nomadic as they disperse. During this time they may use old snail shells which the fill with air. In this way they can spend almost their entire life under water even though they still breathe air!

The Lesser Water Boatman is one of a number of water boatmen species in the UK. It is widespread in ponds, lakes and slow moving rivers. It has long hind legs, covered in hairs that it uses rather like paddles to swim at the surface of the water. Its middle legs are slightly shorter, but its front legs are very short and are used to scoop up food.

This bug is herbivorous, eating algae and detritus, unlike the carnivorous Common Backswimmer. Like other aquatic bugs, Lesser Water Boatmen need to breathe at the water's surface, but they have developed an ingenious trick to allow them to remain under water for longer: they hang upside-down, collecting air from the water's surface and then carry it around as a bubble on their body. During warm weather the adults may take flight.

Males attract females with a ‘courtship song’, produced by rubbing their front legs against a ridge on their head. Their song can be heard on a summer’s evening and is often mistaken for grasshopper noise. Females lay single eggs, which they attach to plant stems or floating algae.

Information courtesy of The Wildlife Trusts and www.rspb.org.uk 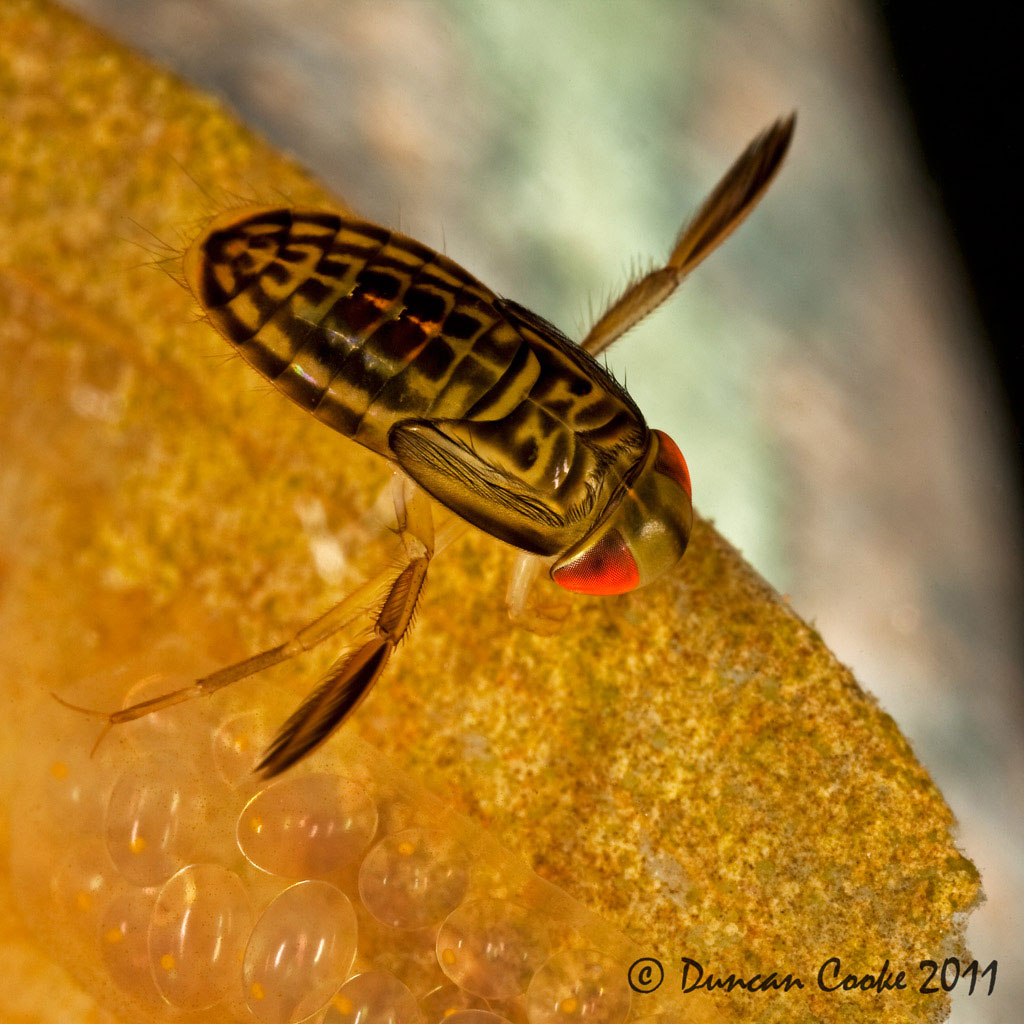 Daphnia is just one of the families within the freshwater crustacean order of Cladocera. Known as water fleas they range from very small, microscopic creatures to almost 1 cm although the normal size is around a few millimetres.

These are an important group as they form the diet of many aquatic species, and are a sign of good water quality. They are the principle food of young dragonflies and fish. The water fleas themselves feed on detritus and bacteria.

Males are rare in populations. Females use asexual reproduction to produce the bulk of the young. The eggs are retained within the carapace (the Daphnia’s hard upper shell) where they hatch into small water fleas. This produces offspring very quickly and helps in the rapid colonisation of a pond.

The Pond Skater can be seen 'skating' over the surface of ponds, lakes, ditches and slow-moving rivers. It is predatory, feeding on small insects by detecting vibrations in the water's surface.

There are nine species of pond skater in the UK, which range between1-2cm in length. Often seen in large groups, they stab their prey with their sharp mouthparts or 'beaks'. The Pond Skater emerges from hibernation in April and lays its eggs. Hatching soon after, the nymphs go through a number of moults.

Information courtesy of The Wildlife Trusts

The term amphibian actually means ‘living a double life’ and this is the most appropriate for the Smooth Newt, also known as the Common Newt. This amphibian can spend up to six months of the year hibernating away from the pond. They often seek damp logs or piles of leaves to hide under, while some hibernate right at the bottom of the pond. For the other six months of the year, they spend it awake with most of their time on land.

If you look into the pond in early spring you may see frog tadpoles and newt larvae busying about, competing for food and space. Although they look similar in water, there is a good way of telling them apart. Look at their legs. If you see a tadpole with two stumpy short legs, it is actually a newt!

During the mating season, the female can lay up to 400 eggs. She is a caring and hardworking mother, carefully laying her eggs one at a time on a specifically picked leaf of an underwater plant. She then folds this leaf over for protection. At a rate of 7-12 eggs a day, this can take some months!

Newts are among the few amazing creatures with the ability to regrow parts of their body: legs, tail, eyes and even parts of their heart. Scientists are investigating how they can do this, and are hoping that in the future it could create a major breakthrough in medicine. Information courtesy of The Wildlife Trusts’ Wildlife Watch magazine.

They are one of the main groups of true leeches with a proboscis. These leeches are generally flattened, and have a poorly defined anterior sucker. Most suck the blood of freshwater vertebrates like amphibians and aquatic turtles, but some feed on invertebrates and freshwater snails instead.

Freshwater leeches are remarkable for their parental care, the most highly developed one among the known annelids. They produce a membranaceous bag to hold the eggs, which is carried on the underside. The young attach to the parent's belly after hatching and are thus ferried to their first meal.

Information courtesy of The Wildlife Trusts.

As larvae, mosquitoes filter floating food particles, grazing on algae, leaf detritus and animal remains. The adult females procure a blood-meal (from humans, livestock, birds, reptiles and mammals, depending on the species) and supplement their diet with plant juices. Adult males do not require blood, relying solely on plant juices. The females need the protein from the blood for the development of their eggs. As larvae, mosquitos are harmless filtering machines and provide an excellent food source for so many creatures.

There are about 40 different kinds of water snails in Britain. Snails need calcium in the water to grow their shells, so acidic ponds will not produce the right habitat.

They prefer calm, still water with plenty of vegetation, or very slow moving rivers and streams. Their diet primarily consists of vegetation (both living and dead) and algae, but they will also consume insect larvae (like water beetles), small newts and fish, and even other snails. Information from Freshwater Habitats Trust.

The common pipistrelle is our smallest and most common bat. So small that it can fit into a matchbox! All UK bats are nocturnal, feeding on midges, moths and other flying insects that they find in the dark by using echolocation. Despite its size this bat can easily eat 3,000 insects a night! Common pipistrelles feed in a wide range of habitats from grasslands to urban areas. They roost in tree holes, bat boxes and even the roof spaces of houses, often in small colonies.

During the summer, females form maternity colonies and have just a single pup. Look out for common pipistrelles jerkily darting about as they hunt for insects in gardens, over wetlands, or around street lights at dusk. They hibernate over winter, usually between November and April, although they may come out to feed on warm days.

The common pipistrelle has dark, golden-brown fur, a slightly paler underside and a dark mask around the face. Its flight is rapid with lots of twists and turns. The soprano pipistrelle is similar in appearance, so the two can be difficult to tell apart.

This British native is a member of the Speedwell family, a fleshy perennial herb. Native plants play an important role in a pond’s ecosystem, providing food for herbivores and a hunting ground for their predators. They also help keep pond water clean, and submerged vegetation maintains oxygen levels, while leaves, stems and roots offer shade and protection from predators.

Brooklime, Veronica beccabunga, has small blue flowers with a white centre. It’s a fast grower, but is easy to keep under control. Brooklime is a favourite plant of newts, which lay their eggs individually on leaves. Information courtesy of Gardeners World.